My Struggle with Anxiety and Depression 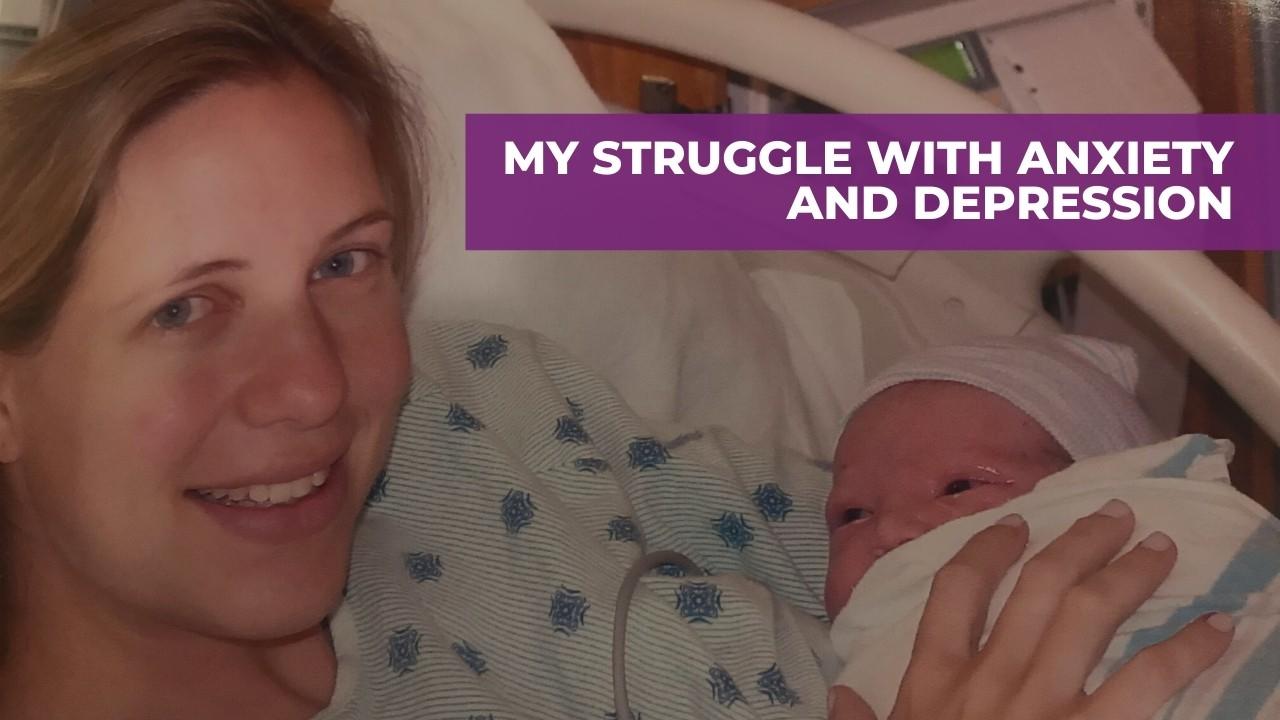 My first child was born 2 weeks ahead of schedule on September 19, 2003 weighing it at a whopping 9 lbs 15 oz.  He was perfect. We had been looking forward to bringing him into the world and adding on to our little family. I can honestly say I had a pretty easy pregnancy (with the exception of carrying a large child) and delivery. Despite the size of our little boy, I was able to have an uneventful healthy delivery and after just three hard pushes we welcomed him into the world. Everything so far was going so perfectly…I had no idea what was awaiting me in the very near future.

As I look back, I started to know something was wrong about 3-4 days after bringing him home. I was unexpectedly hit with feelings that I did not comprehend and emotions I could not put into words. I felt as if a deep dark fog crept in which I could not pull myself out of.

I was bewildered by what was occurring. We were ecstatic about the baby. We had done everything to get ready for him…birthing classes, the nursery, taking time off from work,  and scheduling visitors so we wouldn’t be too overwhelmed with company as we were settling into our new routines. I was an educated (in healthcare nonetheless), responsible female in a loving and mature relationship ready, willing and able to take on this new responsibility. There was no emotional trauma to speak of, no abuse, no worry, no regret about the pregnancy. I was prepared to breastfeed and felt comfortable with my decision. But all I was feeling once we brought baby home was the desire to run the other way. The desire to turn around and bolt for another life. I started longing for the time in the hospital when the nurses would come take him to the nursery at night. I even got to the point when I waited patiently for his real parents to come to my house and take him home for good. Surely, I was not cut out to be his mother.

By about a week in, I hadn’t slept much at all. I’d lay my head down and would just hear crying and my mind would be racing. Had he eaten enough, was he choking, why won’t he sleep. I know all of these things are considered normal thoughts for new moms, but I could NOT stop running these thoughts over and over in my head. It was the greatest exhaustion I had ever felt. I now understood why sleep deprivation is used as a form of torture. Breastfeeding also wasn’t going great. It was painful and took forever.  I wasn’t at all comfortable with the process or the experience.

I remember spending most of my days staring blankly at the walls..wishing they would just suck me in. I wouldn’t answer the door or the phone. I wouldn’t leave the house. My husband would tell me later this was the behavior that scared him the most. Friends told me they came to visit, and I wouldn’t even get up from lying down on the couch. I wouldn’t make any eye contact or speak to them at all. I just lied there…quiet and sullen as if off in a distant land. I really don’t remember much during this time period, but I do remember a feeling of disbelief. I remember being confused as to what I was feeling. Why would I go for days without showering or changing my clothes? And not even care about it? Why could I not just snap out of it? What was becoming of me? Something had a hold of me that was more powerful than anything I had ever felt and it didn’t feel like it was going to let go anytime soon.

By about three weeks in, I was ready to throw in the towel. My baby would cry and cry trying to feed, and I would eventually cry as well from complete frustration and pain. I felt devastated, defeated, beaten down and in a dark hole that I couldn’t pull myself from.  Eventually my crying stopped and was replaced with indifference. Indifference to my physical appearance, my sleep, feeding myself or taking care of anything around the house.

I grew increasingly anxious. I needed to get some rest, but could not sleep for the life of me. I kept logs on how long I should nurse from each breast, pumped breastmilk ferociously,  followed the sleeping and feeding schedule religiously, I was driving myself into madness. Anxiety began to rear its’ ugly head…I couldn’t break from schedule. NOT FOR ONE SINGLE SECOND. I wrote out logs and logs of how much he ate, how long it took, when he pooped or peed and when he slept.

I wanted to switch to formula but developed anxiety around the stigma of being one of those moms…disappointing others for “giving up,” wasting money on formula when I could produce milk, and making a “selfish” choice for my baby’s health. Racing thoughts were the worst. What was the “right way” to get him to sleep and the “right way” to help him feed, the “right way” to soothe and calm him.

There did not seem to be a lot of support around formula use either. This was possibly due to my seeing the world through the lenses of anxiety and depression, but all I noticed were the messages that “breast is best,” shame on you for using formula, and for not picking up your baby every single time he cries. Bottom line, you must do all things just right or you’ll damage your baby and possibly kill him.

So, I kept pushing through with nursing, despite increased exhaustion, anxiety, and frankly, just straight up misery throughout the process. He was a tiny, helpless, little thing, and—this hurts my heart to say now—I was scared of him. I was scared of him waking up. I was scared that I wouldn’t be able to calm him and I hated having to feed him. I felt like a complete failure as a mother. I hated this feeling. I was convinced I couldn’t raise him and longed for his real parents to come get him. I just completely believed that my baby would be better off under someone else’s care.

I remember the day everything changed for me like it was yesterday. It is actually the reason I continue to see our pediatrician even though we have moved over an hour away. I sat in her office with my 6 week old son looking like a shell of my former self. I couldn’t look her straight in the face…she would see my defeat…my failure of doing what all women were designed to do..be a mother. I broke down crying when she asked how things were going. Then…she did something I never expected. She put down my file…took the baby from me and placed him in his car seat…sat down next to me and gave me a huge hug. I sobbed and sobbed and she hugged and hugged. I told her how I hated breastfeeding (those words stung like hot oil spewing from my lips)…how I thought he would be better off under someone else’s care…how I didn’t know what was really happening to me.

Then she said something to me that changed me forever. She told me it was way more important that I heal myself so I could be the kind of mom that he deserved…that was more important than breastfeeding or anything else at that time.

That one little thing (along with strict advice to call my OB-GYN immediately) was the beginning of healing for me. It was the permission to give myself a little grace. Permission that it was okay not to be holding everything together perfectly. I was prescribed anti-depressants and gave myself the permission to slowly wean from nursing. Little by little I began my slow climb back to the land of the living. 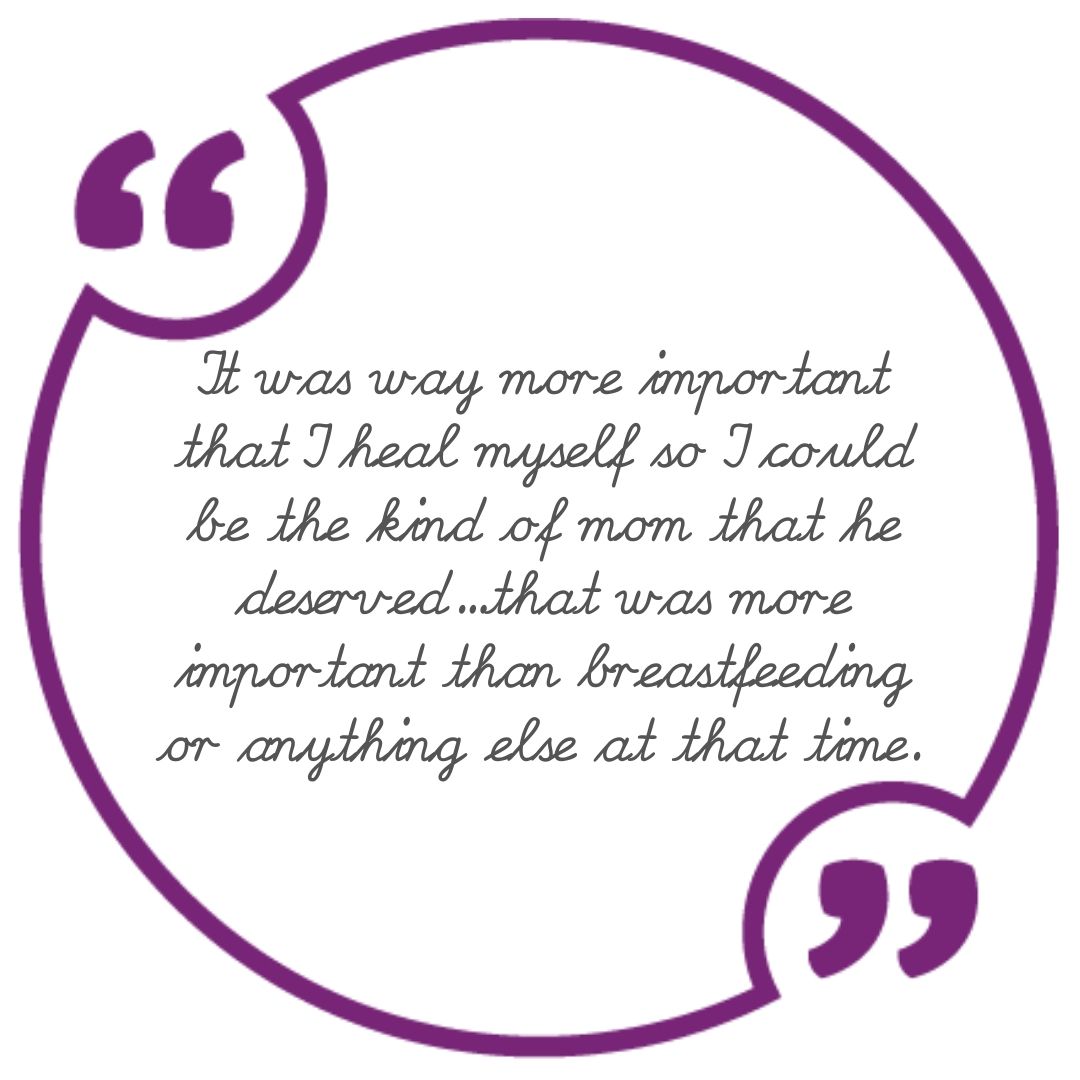 Postpartum depression should not be confused with common postnatal mood swings. Unlike the “baby blues,” postpartum depression involves prolonged feelings of depression that might begin at the birth of a child or even weeks or months later. A new mother with this condition may find herself elated one minute and depressed​ the next. In addition, she may be irritable, resentful, and angry. She may experience a persistent feeling of inadequacy as a mother and a lack of love for her baby. “Some clinically depressed mothers know intellectually that they love their babies, yet they have trouble feeling anything but apathy, irritation, or disgust.” It is estimated that about 15-25% of women will suffer from some form of postpartum depression and many more most likely go undiagnosed.

As I look back on that time in my life, I have a better understanding of the impact our mental health can have on our lives and the lives of those around us. Depression, anxiety, and other mental health disorders rob us of our zest for life. They lie to us, and they lie really well. It’s hard not to believe the lies when we’re in the middle of it all. I did not even recognize myself in the mirror anymore. I was in this brain fog and it was hard to focus or concentrate. It was not like me at all. It was like depression and anxiety devoured my confident, joyous spirit and instead all that remained was an empty shell.

While I am eternally grateful to have bounced back to a healthy balance from that time in my life, I do continue to live with bouts of anxiety and depression. I have tried many many times to break up this unhealthy relationship, but she seems to be extremely committed to me despite my frequent requests for her to move out. It’s why I talk about it openly now. To let people know they are not alone if they are having these feelings and that there is help and support.

Not everyone experiences depression or anxiety in the same way. Your symptoms may be more severe than mine, or they may be less severe. Either way, it is important for you to know that your pain is valid and you deserve to get relief from your suffering. I hope my vulnerability gives you strength to share your story and get help and know you are not alone.

grow or cut back in business